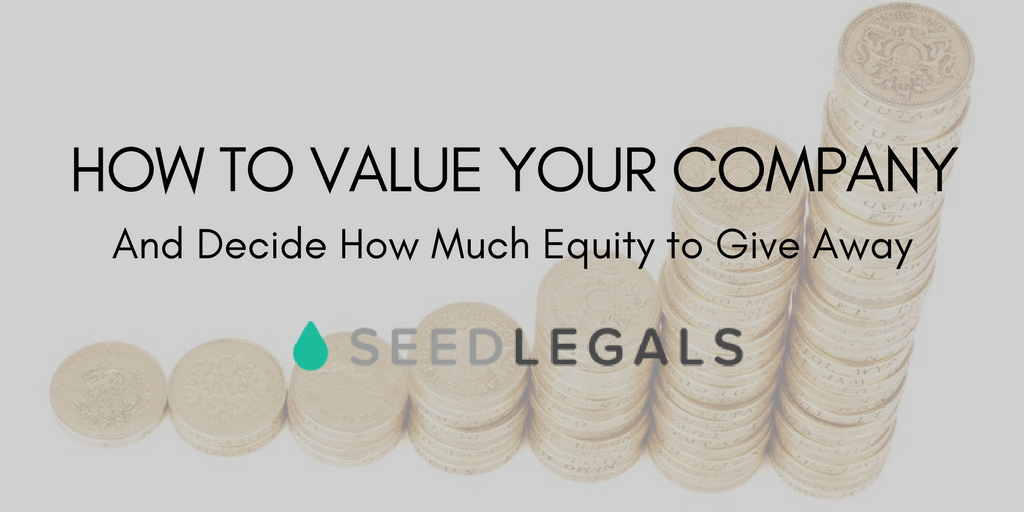 Valuing and deciding how much equity to give away of a company that you’ve, no doubt, put your heart and soul into is always going to be a gnarly issue. Unfortunately there is no single answer but there are a few things that can help you to navigate this notoriously tricky territory.

Generally during the onboarding process, founders will ask one of three questions:

In nearly all cases, the answer is ‘it depends,’ which, let’s be honest, is as useful as a chocolate teapot. With this in mind, it’s a good idea to set out what the ‘depends’ are.

All three questions are intertwined, a decision on one part impacts the others, so it’s best to start at the beginning, and the beginning can be either:

Option 1: Decide how much money you want to raise

Some advisors say ‘raise as much as you can.’ VCs and investors will usually say ‘you should plan to raise enough to last 12-18 months before you need to raise money again.’

However, raising is incredibly hard, so it’s vital you understand how much you need to hit your KPIs, what would be helpful in terms of a buffer, and that you’re realistic about the deliverables and managing investor expectations.

The reason for a 12-18 month runway is that realistically you’ll need to be on the fundraising trail six months before you’ll have new money in the bank, and you’ll need to show growth between now and then to get new investors interested. Any shorter than 12 months runway and it’s going to be hard to hit key milestones or show any real traction which means you are going to be unable to justify your next round valuation. It’s called a runway for a reason – if you don’t have liftoff before you reach the end, things will come to a sudden stop!

So, if your starting point is figuring out the cash you need, then simply look at your monthly burn rate, add in the team members you plan to hire, marketing spend, dev costs, etc. and then look at your monthly burn rate again. Now multiply this by the number of month’s runway you need. Remember to factor in a buffer for the unknown as anything can happen and usually does in startup land!

At this point, it’s important to remember, that although you have used the above as the calculation, funding your monthly burn isn’t the message your investors want to hear. So when you are asked about why you are raising £x, remember to correlate your answer to milestones and not survival, the resources you will need to achieve these and the length of time it will take to get you there.

Option 2: How much of your company you want to give away

As much as Dragons’ Den makes for great TV, here in the real world, high growth investment doesn’t happen like that.

The general rule of thumb for angel/seed stage rounds is that founders should give away somewhere between 16 – 25% of the equity in the company. These parameters weren’t plucked out of thin air, they’re based on what an early equity investor is looking for in terms of return. You see it’s all about the investor really. They are placing bets on you being awesome with the clear knowledge that most of you won’t be, resulting in zero return for them. They are exposed to a high-risk/high potential scenario, hence will likely demand a juicy percentage of your startup equity, which if you think about it, seems fair.

Despite this principle being around for over a decade now, data reveals a new UK trend – the Salami funding round:

Instead of raising a single larger amount in one go which would carry you for approximately 12 – 18 months, an increasing number of companies are opting for a series of smaller raises giving away somewhere in the region of 2% – 6% equity per raise over a shorter period of time.

In days gone by, this type of raising pattern would have been inadvisable for a couple of reasons:

Of course, giving away too much equity is also a big concern. However, tech innovation can and has changed all of this. There are now new solutions like seedlegals.com that make cap table management and exit scenario modelling easy. As to the time commitment of closing a round or an extension to an existing round, well that now depends on how quickly you can click a button, not how quickly you can find a lawyer.

Whether you start from the raise amount or the percentage equity you want to give away, all roads will eventually lead you to valuation. Now we are not talking about fair market valuation here i.e. the amount someone would give you if they came and knocked on your door right now and offered to buy the company. The valuation we are talking about is a crazy number, a nuclear number, a number which bears no correlation to what actually exists on paper. This number’s sole purpose is to be added into a formula so that the equity percentage which you want to give away, or alternatively, the equity percentage your investor is asking for, can be calculated.

So, how should you value your company?

If you were to ask different VCs, they’re likely to come up with a pretty wide variety of responses, including:

Some VCs are led by their head, others by the heart. Either way, there’s no substitute for a data-driven decision, and thanks to available data showing what actually happens across a range of funding round sizes, you’re now well placed to not just come up with a number, but justify it.

StageValuation Idea£300K-£500KYou’re looking to raise £50K to £100K to get your idea off the ground. New innovation means the legals can be sorted for as little as £750, just add investors and you’re good to go.Prototype£300K-£750KYou’ve spent six months refining the idea, doing user testing, building a working prototype. You’re somewhere between Idea and Launch, with a valuation to match.Launch£500K-£1MYou’ve spent a year building the product with your co-founders, probably not paying yourselves a salary, plus you’ve invested £50K of your own money/time in the project. You’re close to launch, you now want to raise money for that last mile of product development and for marketing.Traction£1M-£2MYou’ve launched (congrats!) and you’re seeing good signs of early traction, enough to get investors excited. You have revenue plans, but nothing to show yet.Revenue£1M-£3MUnlike Silicon Valley where the vision of being a unicorn is often enough to get investors interested, UK investors like to see revenue, or at least the promise of imminent revenue. Conservative or sensible? Probably both, but either way if you’re not showing revenue getting funding in the UK beyond Prototype stage is going to be tough. Once you have the some revenue though, along with a plan to scale, you’re on a roll.Scale£3M+To get to this point, you need to have figured out product/market fit, proof of repeatable business and large market demand provable by data, a clear path to scale and new business acquisition, and have identified customer acquisition cost and customer lifetime value. You’ll know when you get there. But note that with that valuation (and amount raised) you’ll have moved firmly from angel investor to venture capital territory which comes with a great deal more investor and reporting obligations, complex fundraising terms, governance and expectations. Something to note before hopping to the top table too soon.

Cautionary note – Silicon Valley numbers will often be much higher so don’t be tempted to use those for the UK or investors will think you’ve been drinking too much Silicon Valley Kool-Aid.

Ultimately, the investor will have the final say but the future is bright for the start-up market, boosted as it is by tech innovation which is simplifying the funding and admin process from the get- go. The hope is that by removing a lot of the uncertainty currently surrounding admin costs, more businesses will be able to focus on the end goal; making a startup idea a successful reality.

Meet Anthony Rose of SeedLegals and other business service providers, as well as a broad spectrum of funders and other entrepreneurs, at the Business Funding Show 2018, an all-day event on 22nd February at London’s East Wintergarden. Learn more and secure your early bird ticket at bfsexpo.com.